By the advantages of flexibility, commercial arbitration is currently the preferred method of dispute settlement for many enterprises. For the beginning of proceedings to settle the lawsuit by commercial arbitration, the enterprise needs to carry out the procedure to submit a lawsuit petition to request Arbitrators for settlement (“Petition”). In this article, we would like to share our legal experience guiding the process of drafting and submitting a lawsuit petition for the dispute settlement by Commercial Arbitration.

1. Some issues to note before drafting and submitting the Petition

1.1. The parties’ agreement for the dispute settlement by commercial arbitration

1.2. The statute of limitations for initiating a lawsuit

1.3. The form of dispute settlement

The parties can select the form of dispute settlement at an Arbitration Center and under its procedural rules (“Institutional arbitration”), or appoint Arbitrators and agree on procedural rules under the law (“Ad-hoc Arbitration”). Depending on the form of dispute settlement selected by the parties, methods of submitting the petition are different. For details on these methods, please refer to Item 3.1 below.

2.1. The form and contents of the Petition

The petitioner can refer to the Petition Form issued by the Vietnam International Arbitration Center (VIAC) below: 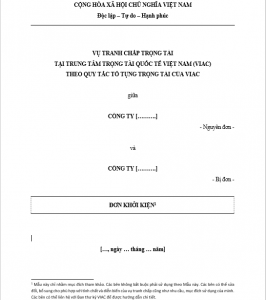 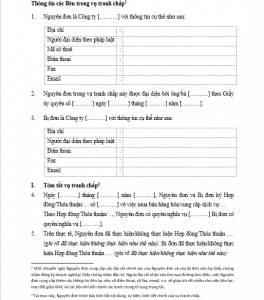 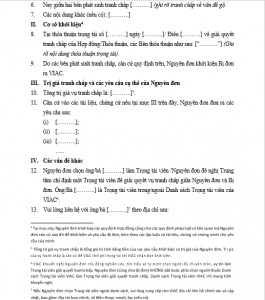 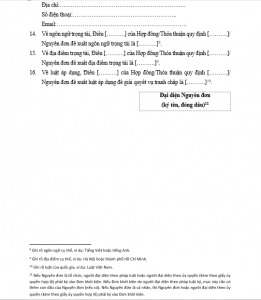 2.2. Some issues to note in the process of drafting the Petition

(i) Briefly and objectively summarizing the case and specifically presenting the grounds proving that the legitimate rights and interests of the petitioner are infringed so that the Arbitral Tribunal can understand the case and determine the grounds for consideration and dispute settlement.

(ii) Specifically presenting figures data, debts, compensation (in a correct currency such as Vietnam Dong, US Dollar…), in particular, the total disputed value since it is an important basis for determining the arbitration charge.

(iii) Specifically and accurately presenting the information of the Arbitrator appointed by the petitioner.

(iv) The petitioner must submit the Arbitration Agreement and documents and evidence attached to the Petition to prove that his or her requests are grounded and lawful.

3. The submission of the Petition

3.1. Methods of the submission

(i) In case the dispute is settled in the form of the Ad-hoc Arbitration, the petitioner must send the Lawsuit Dossier to the defendant. The defendant will then send a Self-defense Statement to the petitioner and appoint Arbitrators. At that time, the formed Arbitral Tribunal will consider the Petition and the Self-defense Statement of the parties.

3.2. Results of the submission

(i) In case of the dispute is settled in the form of the Ad-hoc Arbitration, the Arbitral Tribunal will decide on the arbitration charge advance and the parties will carry out further proceedings under the agreed procedural rules.

Above are our legal shares on the process of drafting and submitting a Petition for the lawsuit settlement by Commercial Arbitration. We hope that the article can help you better understand this process and effectively draft and submit the Petition when participating in the lawsuit settlement by Commercial Arbitration to protect your legitimate rights and interests.