PROCEDURE OF DRAFTING AND SUBMITTING A CIVIL LAWSUIT PETITION TO COURT

PROCEDURE OF DRAFTING AND SUBMITTING A CIVIL LAWSUIT PETITION TO COURT

Nowadays, filing a lawsuit in Court is one of the popular civil dispute resolution methods in Vietnam. The lawsuits at Court initiate from when the plaintiffs (including individuals or organizations, themselves or through legal representatives) carry out the procedure for submitting the petition to the Court to protect their legitimate rights and interests. However, it frequently happens that the plaintiff has to repeatedly provide the Court with additional documents after the petition submission so that it can be accepted. At that time, the plaintiff has lost his/her time and effort, and the court proceeding has been prolonged. Therefore, we would like to share this legal article to guide you in the procedure of drafting and submitting a petition to the Court.

1.1. Form and contents of a Petition

The form and contents of a Petition shall comply with regulations of the law. Accordingly, the plaintiff can compose a Petition containing the form and contents under the law or use the Petition Form No. 23-DS (attached with Resolution No. 01/2017/NQ-HDTP dated 13 January 2017 issued by the Council of Judges of the Supreme People’s Court).

Please refer to Petition Form No. 23-DS as follows: 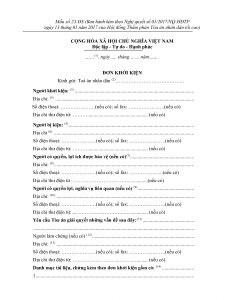 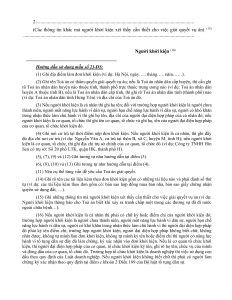 In that, the petitioner should note the following issues:

(i) Clearly and accurately determining the competent Court under the applicable law and state this content in the Petition;

(ii) Specifically presenting figures data, debts, compensation (in a correct currency such as Vietnam Dong, US Dollar…), in particular, noting the figures data for important grounds to determine that the legitimate rights and interests of the petitioner are infringed.

(iii) Although the Petition form does not require to summarize the case and present the grounds for the lawsuit, the petitioner should supplement these contents so that the Court can shortly get a preliminary understanding of the disputed relationship between the parties and determine the grounds for considering and settling the case.

– The case summary: This content commonly mentions the time when the parties established a civil legal relationship and describes the process of arising the dispute.

– Grounds for the lawsuit: This content includes contractual terms; regulations of law and other relevant regulations to prove that legitimate rights and interests of the petitioner are infringed and lawsuit claims are grounded.

b) Documents attached the Petition

For example, in a dispute in connection with a contract, the petitioner should note to attach the contract and documents, evidence proving the contractual performance between the parties such as value-added invoices, minutes of goods delivery, minutes of acceptance, debt comparison, payment request, … (if any).

After preparing the Petition dossier, the petitioner can submit it to the competent Court using 03 following methods: (i) Direct submission at the Court, (ii) Sending to the Court by post, or (iii) Sending through e-portal of the Court.

The above is our legal share of the procedure of drafting and submitting a Petition to Court. We hope this article will be useful to you.

We will also analyze and give legal share on the procedures of civil lawsuit settlement at the first-instance Court in the next articles. Please continue to follow us.