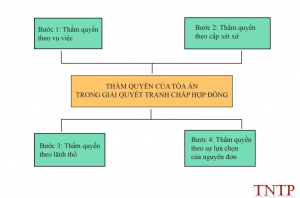 Currently, the COVID-19 epidemic has been complicatedly developing in countries around the world and has harmed the economy. Therefore, business activities of many enterprises in Vietnam also face many difficulties, with violations of obligations under the signed business or commercial contracts (“Contracts“) and arising disputes. The obligees may sue the obligors to protect their rights and interests. At that time, to initiate lawsuits, the enterprises need to determine which the Court has jurisdiction to settle the dispute. Therefore, in this article, we hereby mention and analyze the determination of the Court’s jurisdiction when enterprises initiate lawsuits to request the dispute settlement of business or commercial contracts.

To determine which the Court has jurisdiction to settle a dispute arising from the Contract, the enterprise initiating the lawsuit needs to take the following steps:

Step 1: Determining the jurisdiction of courts under cases

The type of arising disputes mentioned in this article arises from business and commercial activities between organizations with business registration, which are all for profit. If the parties in the Contract do not agree on the jurisdiction of the dispute settlement at arbitration or have such an agreement but fail to meet the statutory conditions for the dispute settlement at arbitration, the dispute may be settled at the competent People’s Court.

Note: For lawsuits involving foreign elements, the courts in Vietnam shall have the jurisdiction to settle in the following cases: (i) The defendant is an agency or organization which is headquartered in Vietnam or the defendant is an agency or organization has a branch or a representative office in Vietnam, applicable to cases related to the operation of the branch or representative office in Vietnam of such agency/organization; (ii) The defendant has properties in Vietnam; (iii) Disputed relations are established, changed or terminated in Vietnam, objects of which are properties in Vietnam or acts performed in Vietnam; (iv) Disputed relations are established, changed or terminated outside of Vietnam’s territory but involve rights and obligations of Vietnamese agencies, organizations and individuals or agencies, organizations and individuals that are headquartered or reside in Vietnam; or (v) other civil lawsuits where parties are allowed to choose Vietnamese Courts to settle according to Vietnamese law or International treaties to which the Socialist Republic of Vietnam is a signatory and parties agreed to choose Vietnamese Courts.

Step 2: Determining the jurisdiction of courts under settlement levels

(i) If the dispute involves the parties or properties in foreign countries or must be judicially entrusted to representative agencies of the Socialist Republic of Vietnam overseas or foreign courts/competent agencies, it falls under the jurisdiction of People’s Court of provinces;

(ii) The remaining disputes not falling into the cases in Item (i) shall be settled by the People’s Courts of districts.

The territorial jurisdiction can be determined as follows:

(i) If the Contract between the parties has an agreement to request the Court of the locality where the plaintiff is headquartered for the dispute settlement, this Court has jurisdiction to settle the dispute; or

(ii) If the Contract between the parties does not contain such agreement, the Court of the locality where the defendant is headquartered will have the jurisdiction to settle the dispute.

However, the plaintiff has the right to choose a court for the dispute settlement in the following cases:

(3) The plaintiff may request the Court of the area where the contract is performed to settle the dispute;

(3) In case the dispute arises from the operation of a branch of an organization, the plaintiff may request the Court of the area where the organization’s head-office is located or where its branch is located to settle the dispute;

To initiate a lawsuit to settle the dispute arising from the business or commercial contract, the enterprise must determine the competent court in the dispute settlement in advance. The exact determination of the competent Court helps the lawsuit process to perform smoothly and shortly and to avoid the case that the Petition is transferred to another competent Court.

In light of the above, TNTP hopes that this article will help you in determining the Court having jurisdiction to settle the dispute between the parties in the business or commercial contract.